The Sewists of the Baronial Investiture Florentine Dream Team (listed by precedence):

THL Kassandra Aiantide made a Jerkin and Venetians of linen for A in Heraldic colors. Eleanor inghean Mhic Congaill made a white linen shirt for A.

These items are complete.  These Gentles have worked over many weeks to put together 16th-century Florentine Clothing for Fiore and Frithuric’s Investiture and appropriate late-period garb for our gryphlet. 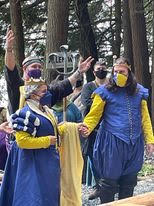 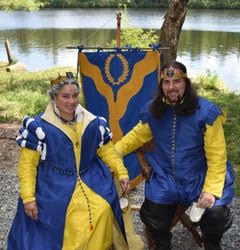 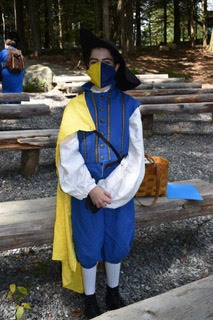 Fiore patterned and cut the individual items for the investiture garb and the team worked on sections together often stretching their comfort level  as they worked to construct.  The doublet, jerkin, and veste bodice are complex patterns some of which involved pad-stitching and managing multiple interlinings.  This cohort took on this challenge meeting multiple Sundays to work together and complete these items in time for the Investiture recording at Harpers Retreat.